The following page provides you NCERT book solutions for class 8 social science, social science class 8 notes in pdf are also available in the related links between the texts.

1.Why does a democratic country need a Constitution?

Answer:- A democratic country need a Constitution because:

→ It lays out the important guidelines that govern decision making within the various societies of the country.

→ It lays down the ideals that form the basis of the kind of country that its citizens aspire to live in.

→ It serves as asset of rules and principles as the basis by which the country has to be governed.

→ It provides rules to safeguard the interests of minorities and prevent any kind of domination by the majority on minorities.

→ It lays down rules that guard against the misuse of power by any politician leader.

→ It also provides rights to its citizens and protects their freedom.

What is the difference in who exercises ‘Executive Power’ in the above two Constitutions of Nepal? Keeping this in mind, why do you think Nepal needs a new Constitution today?

Answer:- The difference in who exercises “Executive Power” in the given two Constitutions of Nepal is that in the 1990 Constitution, this power was vested in the King and his Council of Ministers, while in the 2007 Interim Constitution of Nepal, “Executive Power” changed hands to being vested only in the Council of Ministers, thereby making Nepal a democracy from being a monarchy. Nepal needs a new Constitution today because it is no longer a monarchy. The older Constitution vested power in the King, but when the country is now a democracy, a new Constitution is needed to reflect the “democratic” ideals of Nepal that the peoples’ movement desired and fought for. In order to achieve this, all its constitutive rules must be changed.

3.What would happen if there were no restrictions on the power of elected representatives?

Answer:- If there are no restrictions on the power of the elected representatives the leaders might misuse the powers given to them. The Constitution provides safeguards against this misuse of power by our political leaders.

(b)In a city, 5 per cent of the population are Buddhists.

(c)In a factory mess for all employees, 80 per cent are vegetarians.

(a)Female teachers are in minor The female teachers must be allowed space to voice their opinion so that their efforts at teaching are not hindered by their minority status.

(b)Budhhists are in minorit Every individual has the right to follow the religion of his/her choice. People of other faith must respect the religion other than their own.

(c)Non-vegetrians are in minorit Food choice is personal wish so he/she should have the freedom to eat what he/she wants.

(d)Under privileged are in minor Citizens cannnot be discriminated by their birth so their views have to be respected.

5.The column on the left lists some of the key features of the Indian Constitution. In the other column write two sentences, in your own words, on why you think this feature is important: 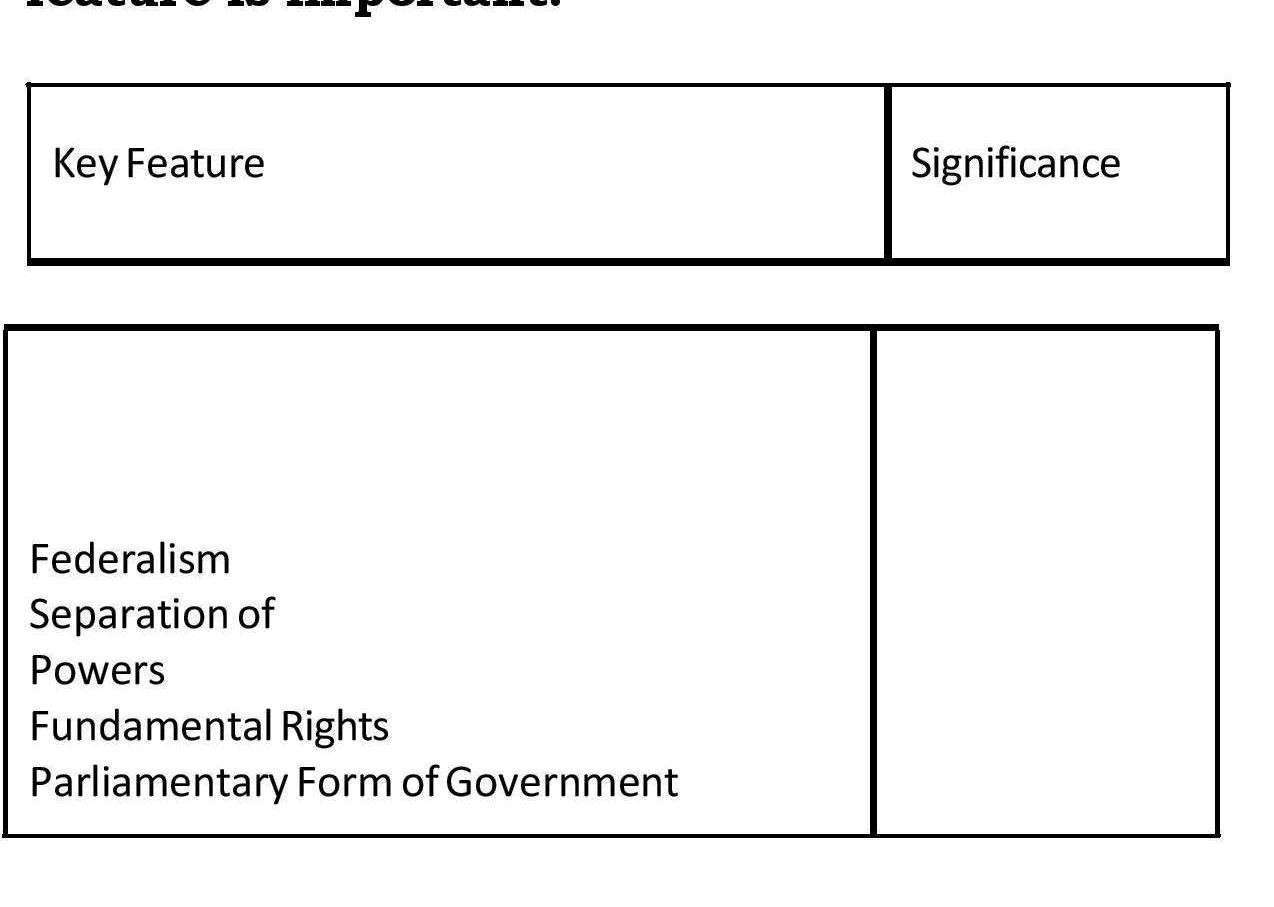 1.Federalism: It ensures national unity and at the same time allows individual progress. A federal government allows the Centre to hold supreme power but its Constituent States have some power as well.

2.Separation of Powers: This serves two purposes: firstly, tyrannical use of power is avoided since it does not vest power in any single authorit Secondly, the 3 organs of power also work as a check on each other, thereby maintaining a good balance.

3.Fundamental Rights: These are important because they conform to a humane socie They also protect citizens against arbitrary and absolute use of power by the State.

4.Parliamentary Form of Government: It upholds universal adult franchise. This entails the fact that the people of a country play a direct role in electing their representatives to run the state as well as the nation.