Have you ever walked through a cloud of gnats on a hot summer day, only to have them follow you? No matter how you swat at them, or even if you run, they won’t leave you alone. If so, then you have something in common with an atom. Atoms are the building blocks of molecules, which when combined, make up everything. From the smallest one-celled amoeba to every person who has ever lived, and even to the largest and brightest stars in the sky, atoms are everywhere. Even way back in the time of ancient Greece, they wondered about atoms. That’s where the word comes from, ancient Greece. The word Atoms, when translated into English means something that cannot be divided any further. So what does an atom look like? Until very recently no one could say one way or another. Technically we can’t see individual atoms since there are no microscopes powerful enough. Since technology improves all the time, it may not be long before we can actually see a whole atom through a special microscope.

Even though scientists cannot see atoms with microscopes, they have developed ways to detect them and learn about them. Atoms are made up of three basic parts: protons neutrons, and electrons. There is a core or nucleus, and an electron cloud. The nucleus is made up of positively charged protons and neutral neutrons. The nucleus is held closely together by an electromagnetic force. Protons and neutrons make up the nucleus of the atom. A cloud of electrons orbits the nucleus. The negatively charged electrons are bound to the nucleus and zap around it in a cloud. Do you remember the cloud of gnats? The gnats would be the electrons zipping around you, the nucleus. There are different ways atoms are classified. They can be classified into elements, like oxygen, carbon, or hydrogen. All of the elements known to man so far can be found on the periodic table. The number of protons an atom has decided the chemical element. The number of electrons defines the atom’s chemical properties like its melting temperature and boiling point.

The study of atoms and tiny particles that are even smaller is called quantum mechanics. Scientists still have much to learn about atoms. Maybe you will enter the study of quantum mechanics and find a brand new element. Maybe they’ll even name it after you!

(b) What does the word Atomos mean in the old Greek language?

(c) The author begins this article by comparing a cloud of gnats to an atom. Give reason.

(d) What do the gnats represent? What does the person walking through the gnat represent?

(f) Where can we find all the elements known to man?

(g) If you wanted to find the mechanical elements of an atom, you would need to…

(h) What is quantum mechanics?

(a) Atoms are the building blocks of molecules, which when combined, make up everything.

(b) Atmos, when translated into English, means something that cannot be divided any further.

(c) He does so because just like a cloud of gnats wouldn’t leave a person alone, atoms are everywhere and one cannot escape them.

(e) An Atom is, made up of three basic parts: protons, neutrons, and electrons.

(f) All the elements are known to man so far can be found on the periodic table.

(g) find the number of protons present in it.

(h) The study of atoms and tiny particles that are even smaller is called quantum mechanics. 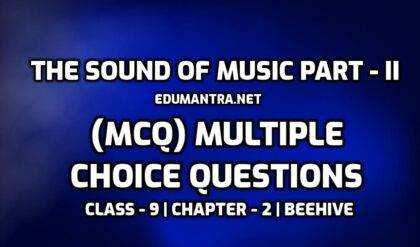 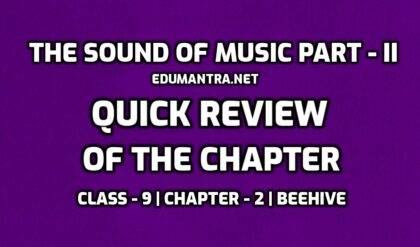 The Sound of Music Part-II- Quick Review of Chapter 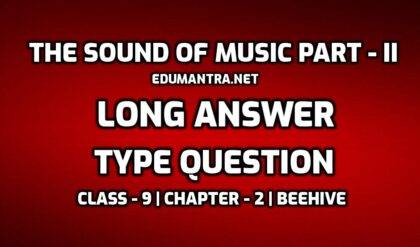 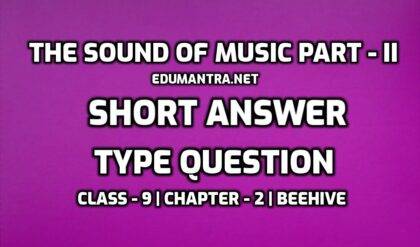 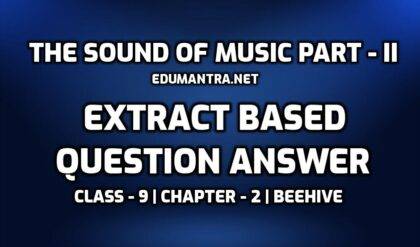 The Sound of Music Part-II- Extract Based comprehension test Questions 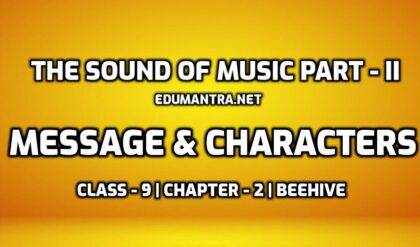